An A-Z of the Supernatural: A is for Amulet

by MarieAnneCope on 14th January 2020 in A-Z of the Supernatural, Blog

As an author of dark supernatural novels, I have a fascination for all things supernatural. There are many elements that run through the Bonds series of novels, from warlocks, witches and vampires to the objects, spells and curses that give them their power – or deprive them of it. In this series of articles, I am going to be taking a deeper look into the supernatural world – as well as sharing a few glimpses into my life as an author with a fascination for the mysterious side of life.

In this article, the first in the series, I take a closer look at an object that comes up time and again throughout history – the amulet.

What is an amulet?

An amulet is an object that is believed to offer protection to the person in possession of it. These days, amulets are often referred to as good luck charms, although this is actually a misnomer in a certain sense, as they are intended to protect a person from trouble rather than to bring good fortune. The word “amulet” originates from the Latin word amuletum, which is defined as an object that has the power to avert evil. Amulets may be either natural objects or items made for the purpose. 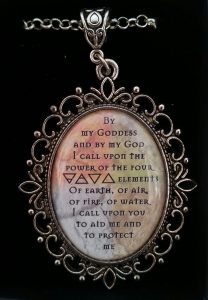 Above: This necklace bearing the summoning spell from the Bonds series is an example of a purpose-made amulet.

How do amulets work?

Amulets whose power is said to be derived from magic are typically rooted in folk religion or paganism. Amulets are often ritually charged in order to store and radiate protective energy. Although the time for which their power lasts may vary, traditionally it is tied to the lunar cycle.

Interestingly, religious or sacred objects, particularly those found in Christianity, technically have no power of their own. Instead, they derive their power by being blessed, typically in conjunction with the faithful disposition of the bearer. The crucifix is generally seen as an exception to this rule.

Amulets are prevalent in many cultures and religions, meaning that a variety of items have historically been considered to offer protection as an amulet. Popular natural objects, most notably gems, plant parts and animal parts. Well-known examples of these include topaz, which has historically been believed to protect the wearer from curses, and aconite (often known as Wolfs-Bane), a poisonous plant which has long been believed to offer protection against wolves, among others. An ear of wheat has also long been considered to bring protection to its bearer The rabbit’s foot is another common amulet that appears in various folklore around the world. In many cases, the power that natural amulets are believed to confer requires special conditions to be met in their acquisition or preparation.

In the Christian world, one of the most obvious amulets is the crucifix, which is traditionally believed to ward off evil. Holy water and blessed salt can also be considered amulets. The pentagram is another symbol that has been regarded as an amulet in the Western world since medieval times. Certain runes also feature across many regions. 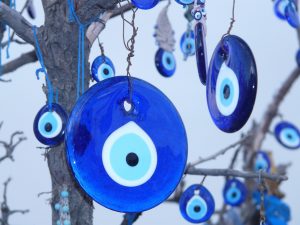 Above: The familiar Nazar amulet, said to ward off the evil eye.

In China and Japan, certain calligraphy styles are believed to ward off evil spirits, and many amulets derive from these symbols, while in Arabic culture, the distinctive Nazar is a common sight. A typical Nazar is made of handmade glass featuring concentric circles or teardrop shapes in dark blue, white, light blue and black, occasionally with a yellow/gold edge. The amulet is believed to protect against the evil eye. Statues, coins and other objects have also historically been used as amulets.

What’s the difference between an amulet, a charm and a talisman?

Although there is a long-standing tradition of wearing pendants that are purported to bring luck to the wearer. In such cases, the pendant is technically a charm or a talisman, rather than an amulet. The main difference is that while an amulet protects the bearer from harm, talismans and charms are said to carry magical powers other than protection.

In Broken Bonds (Bonds book 2) Becca finds an amulet in one of her grandmother’s trunks. It used to be Ebenezer’s and he used it to spy on others – you can read about it in more detail in The Curse of Souls. It is a kind of diamond-shaped silver medallion with a lapis lazuli stone in the middle, which looks like an eye.

Above: A quick sketch I made of Becca’s amulet in my notebooks for Broken Bonds.

Do you wear or carry an amulet? I’d love to hear about what you use and what you use it for – feel free to share in the comments below and add a picture if you wish.