Having just returned from the annual Theakston Old Peculiar Crime Writing Festival in Harrogate, I decided to start a series of mini blogs, charting my adventures as an author. Maybe I should have started this earlier in the year, or even last year, but better late than never, as the saying goes.

The festival is a four day event, but I only bought a ticket for one day this year – I have booked for the full event next year though! My reasoning was two-fold – I hadn’t been before and so didn’t know if I would enjoy it, and, more importantly, I only had eyes for James Patterson.

Now, you may be wondering why a horror writer could possibly want to go to a Crime Festival. Well, the short answer is that I love crime. I read it and watch it all of the time, though I have only dipped my toe into it as an author. I do have a plan to branch out into crime writing once the Bonds Series is complete, and what better way to discover the life of a crime author than by going and mixing with them.

The great thing about this event is that there is a fabulous mix of authors, from the very well-known right down to the debut. It’s a chance to rub shoulders with your idols, make new friends, listen to interesting talks, and make useful contacts for your own writing.

As I sat and chatted with my new bunch of friends, they told me that despite what they write, crime writers are a friendly bunch, and I have to agree. I recognised people whom I’d seen at Crimefest earlier in the year, and even plucked up the courage to say “Hi”. My new friends told me that the same faces attend every year and so you soon become part of a wider circle who will never let you sit there on your own – which was my biggest fear.

Now, back to the reason for my visit – Mr James Patterson. I have been a major fan of JP for many years, with the Alex Cross series and The Women’s Murder Club series being my favourites. I also subscribe to his writing Masterclass and drew an immense amount of inspiration from his words, glowing as I discovered that we have a similar approach to writing novels. So, when I saw he was one of the headliners, I just had to go.

My plan was to ask him how I apply for the chance to co-author with him, and one of my friends suggested I take a sample of my writing with me, to give to him. This was a week before! I was in a panic as I hadn’t written any crime yet, and then I remembered that I had, many years ago. As such, I dusted off that old short story, read through it, cringing as I did so, before attacking it with my trusty red editing pen, forming a cohesive crime story from it. 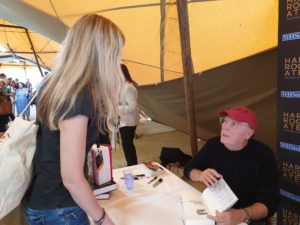 Despite my gin intake the previous day, I was there bright and early to listen to his talk – he is very entertaining – before standing in line with my books for him to sign, my story clutched in my hand. I was a nervous wreck! My hands were shaking and, when I eventually had my chance, my words came out in a fangirl tumble. I did manage to cohesively get across what I needed to, and his publisher was only too happy to accept my short story. Right now, everything is crossed in the hope that he, and she, read it, and that it wasn’t confined to the recycling.

The point is, I took an opportunity that I was presented with and went for it. Who knows where it may lead!

Well, as you can imagine, I needed to lie down with a cold flannel on my head after all that, but alas, I was not staying at the Old Swan. Instead I made a beeline for the coffee shop and a well deserved latte. Whilst I was making my way there, I thought I saw another of my heroes, Ian Rankin, heading in the same direction. Sure enough, as I entered the coffee shop, I saw the esteemed Mr Rankin grabbing a corner table to relax and do his crossword. 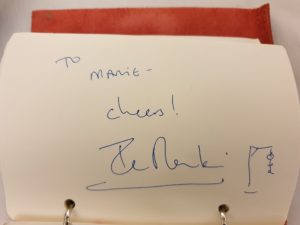 I purchased my coffee and then went to occupy a table close to him, and sat for a while pondering whether I could and should disturb him.

In the end, I adopted my usual take on things and went over and introdcued myself. I must say, 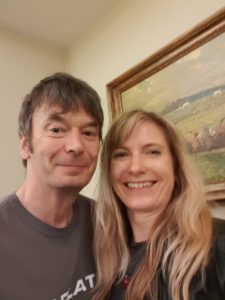 I was far more articulate than I had been with JP, and we sat and chatted for a short time before I left him to his crossword and departed with a much treasured autograph.

Sitting back at my table and sipping my coffee, I realised I had missed an opportunity and again, after much pondering, I broke into his crossword time once more to broach the subject of a photo. He was more than happy to oblige and took it himself!

I thought I’d peaked for the day, but as I was walking through the bar, Ian Rankin was coming towards me and, recognising me, he told me he loved the photo of us that I’d posted on Twitter. I was made up. Oh, and he did manage to finish his crossword… in the end!

By the way, how many people can pick up their phone to take a photo and say “Ian Rankin had this last, and I don’t know how to take it off selfie mode”?!!