by MarieAnneCope on 6th October 2020 in Blog 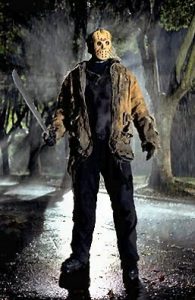 Modus Operandi: Stalking his prey and hacking them to death. His prey tend to be couples partaking in immoral acts that assail his moral upbringing. He also has a tendency to act as a psychological threat to certain characters, without actually killing them.

Appearance: Jason’s appearance is rather non-descript, except for the hockey-goalie mask he stole from one of his victims, a move which has placed him into the serious psycho camp. His mask, though a definite for any self-respecting psycho not blessed with a scary visage, serves a functional purpose, hiding his facial deformity, which had always been a source of ridicule.

Background to behaviour: His case for his behaviour stems largely from the fact that a group of teenagers tried to drown him in Camp Crystal Lake, when he was a child. Their reasoning? None really. He was mentally disabled and facially disfigured and they thought it would be fun to see if he could swim, as teenagers do… Not only that, but he also witnessed the murder of his own mother, who had taken it upon herself to avenge his near death, by killing the camp counsellors, who she believed were to blame. Subsequent to all this, Mr Voorhees had to grow up alone, in the woods, with no one to teach him right from wrong; with no one to look after him; and with no one to tell him that killing people isn’t the way to live his life. Basically, he had no carer and no role model.

Weakness: The lake that almost took his life when he was a boy. He is rendered helpless if he becomes trapped beneath its surface.

Marie Anne Cope says: “Now, Jason has a valid case for his actions. He was almost drowned by teenagers and his mother was murdered because she was seeking vengeance for what those teenagers did to him. My main bugbear with Jason is, why he errs towards couples having sex? In reality, any teenager should flip his switch, but it is copulating couples that are his target. This may be to do with his upbringing or it may be to do with his immature mind, due to his disability. We will never know, as Mr Voorhees declines to speak.

Unlike Freddy, I find Jason a rather unbelievable character. He is human after all and yet, he cannot be killed. He has the resurrection abilities of an immortal being, which he is not and, as such, I find the continual re-incarnation farcical. If you want to make your character seemingly indestructible, create another world; a world where such beings exist. Don’t pick an almost murdered, disabled child and turn him into an indestructible hulk of a man, because it just doesn’t ring true and, hence, turns people off.”