The Story of My Butterfly Tattoo

by MarieAnneCope on 24th October 2019 in Blog

If you were following my ‘THOSE PHOTOS’ posts over on my author page, then you will already know this story, or the background to it at least. For those of you who missed them, or this one in particular, here is the story behind my second tattoo, plus a little bit extra!

You can see the tattoo in ‘THOSE PHOTOS’, but also in all its colourful glory. It is a symbol that marks a turning point in my life – my rebirth.

In June 2012, I was sitting on a clifftop in a park on Victoria Island in Canada, staring down at the waves crashing on the rocks below me. I had never been so depressed.

My manager was bullying me mercilessly, to the point I couldn’t face going in, I couldn’t leave as I was financially tied to the job by a huge mortgage that felt like a noose ever tightening, and I was in an abusive relationship that I was too scared to leave.

I could only see one way out as I stared into those waves, hypnotised, believing no one would care, that no one would miss me, that it was best all round.

Instead, I got up and bought a notebook and pen, sat underneath a tree and wrote a list of what I wanted to do. And, do you know what? Without thinking about it, I have done it; I have turned my life around – sold my house, quit my job, ended the relationship, gone self-employed, published my books, qualified as a yoga teacher.

It is possible to change your life if you truly desire it; I know because I have done it.

To symbolise my rebirth, I decided to have my second tattoo – my beautiful butterfly ❤ 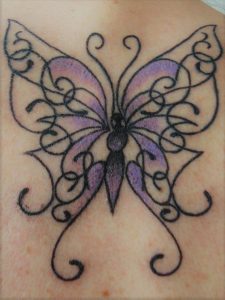 I found the image I wanted on the internet and took it down to the tattoo parlour in Victoria. A huge bear of a man faced me as I handed over the image. He stared at it for a few moments and then shook his head, saying he wouldn’t do it. I was crestfallen and turned to leave, but his big meaty paw stopped me.

‘I know what you want,’ he said. ‘I’ll design one for you, just for you. Come back tomorrow.’

When I returned the next day, he presented me with this gorgeous image, ever so proud of himself. I was both stunned and shocked – stunned by its beauty, but shocked by the size of his design (it would have spanned my whole back).

He was crestfallen, but he got over it. It turned out that as well as being a tattoo artist, he made intricate and decorative cakes for a living!

Never judge a book, as they say 😉

May fear protect you when the darkness comes.