TALES to set your nerves on edge. TALES to chill you to the core. TALES to make you want to sleep with the light on. But most of all, TALES to make you afraid, very afraid, of what lurks between the veil of this world and the next. A veil at its finest at twilight and at dawn, but a veil that can be lifted at any time. Don’t forget to lock your doors and adhere to those superstitions. For, dear reader, every superstition is grounded in reality…

‘Three silver bullets were all he had left. Three were never going to be enough.’ (Three Silver Bullets)

‘Raven Bridge is its official name, but the residents of Copper Falls nicknamed it “Death Bridge”.’ (Raven Bridge)

‘John’s eyes were wild. He could feel the panic escalating through his body. What the hell had possessed him to come running in the park?’ (The Creature Within)

‘Clinging to the shadows, he creeps forward, never taking his eyes off his prey.’ (The Night Stalker). 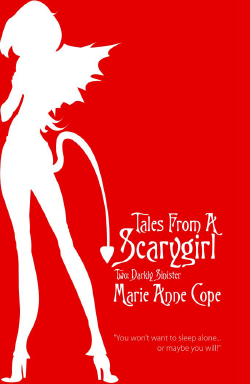 Each story was unique in its own way and some gave you chills you weren’t expecting.

This is a must read for any horror fans out there!

Some of them left me totally flabbergasted! Those are my favourites!

Very hard to put down as you just find yourself wanting to read the next one.

Thrills, spills and the darkest of twists – a real roller coaster ride of terror!

Tales From A Scarygirl is going to have you sleeping with the light on!

Not for the squeamish!

It’s definitely a book that leaves you wanting more.

Unearth More From The World Of Marie Anne Cope…